A scripture that transcends all boundaries, the only one you may ever require. Aksara Bhagavad Gita offers a universal interpretative paradigm to interpret any scripture of any religion, philosophy, or ideology, with an in-built checker and auto-updater to keep abreast with the changing times, circumstances and values-dynamics.

The ideologue and his ideology are inseparable and form the key to interpret any scripture. The ideology forms the key or the essence of how to solve. In the instant case, the ideologue being omniscient, omnipresent, omnipotent, flawless, and complete, this legacy is inherited by the ideology, which forms the key basis with which to interpret the scripture, comprehend its nuances, and put it into practice.

These and other characteristics of the ideologue/ideology as found hardcoded in the Gita itself is discussed and the underlying principles of interpretation are enunciated. The substantiation of the principles enunciated takes the form of a debate between students.

Far from being a finale, it is explorative and an invitation to the world at large to synergize, rediscover the pristine and the infinite.

Haribakth is the pen name under which Ravindra Rao has written the Book. He holds a Master’s degree in Commerce and a Bachelor’s in Law from Marathwada University, Aurangabad, India. His basic graduation was from Osmania University, Hyderabad, India. He worked as an IT officer in a State-Run Bank for over 34 years prior to his retirement in 2015. This is his second book, with a third in offing in future.

Vaishnavi holds a Bachelor’s degree in Design from Shivaji University, Kolhapur. She quit her job in Goa to do freelancing. The book cover and the illustrations therein are attributed to her.

Congratulations Ravi Sir, it’s really great to see your second edition of a book which will definitely enlighten the minds of many. 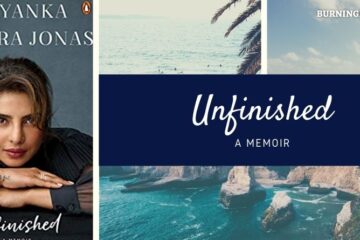 Priyanka Chopra Jonas Comes Up With Her Memoir- ‘Unfinished’

Priyanka Chopra’s book- ‘Unfinished: A Memoir’ has been released today. The actress looked excited about her autobiography and expressed her feelings at many launch events. ‘Unfinished’ book by Priyanka Chopra Jonas is an open and Read more…