Karan Kapoor has a long-time affair with his pencil. An idealist-pessimist by nature, he strongly believes that the world cannot be changed. He still looks forward to changing as little and as much as he can for his belief in the power of words is stronger.

He closely tries to observe life and extract meaning out of all its chaos. His time is consumed by putting those observations on paper. If not writing, he is obsessing over classical music or the authors he looks up to—he doesn’t know how to do much else.

He had to edit his new book a dozen times on the basis of reviews by writers and readers. And undoubtedly, people are loving the book. Maya is now a bestseller on Amazon.

Read on as Karan Kapoor talks about his book, life as a writer, favourite books and writers, and more.

1. Let’s begin with a brief introduction to your latest book—Maya.

Maya is a short book about a guy who is, for lack of a better word, an asshole, and a woman who confuses abuse for love. There is nothing extraordinary about the plot, but the way it plays out is bound to challenge your ideas of love.

2. Where did you get the idea behind the story of Maya? Do the characters come from real-life incidents or from your own imaginations?

3. Three lessons that you learnt after publishing your first book— The Dreaming Reality? How did these help you to craft the second one?

Haha, right! So, we independently published The Dreaming Reality last year Valentine’s and have sold over 6 thousand copies of it so far. All by ourselves. It is considered a really good number by a publisher friend of ours, so we had the confidence to do it again.

And going into the lessons would be too technical, but all I can say is it turned out well. Better than we expected. We released Maya on 17th August, and on 27th it was a Bestseller on Amazon. So, lessons learned well, I suppose.

4. Having co-authored a book and then writing a complete book alone. How do you differentiate both the processes in terms of writing?

Co-writing a book was awesome. Hands down the best experience of my life. It was so much fun. And doing it with your best friend — talking twelve hours a day or more for four years every day — well, you can imagine. It was beautiful. There were moments of dispute, but we always got over those. It was a glorious time.

Whereas writing alone was an exhausting process — not that I didn’t enjoy that exhaustion, but being in someone’s shoes can take its toll on you. And I had to be in a lot of people’s shoes for this story. And the two people the story revolves around are not good people. It was hard to be in their particular ugly, uncomfortable shoes.

5. Tell us about the journey of Maya once the manuscript was ready on your laptop. How much time did you take to finish writing the book?

So, I started writing the story of Maya in February 2018, but I was really busy at the moment with the launch of my first book, so I could only devote so much time to this. We were going to college festivals to see our book every day, so it came out very slow, considering it was a short story.

I had every event in my mind planned, but to write it down was tricky. You’ll know what I mean by that when you read it, I suppose. So, I finished it in June. Like the first respectable draft. Then I started sending it out to people — for feedback and reviews. I sent it to so many writers and good readers around the world that I had to revamp the story over a dozen times to bring it where it is.

And as the story finally finished, it was December. I did not think of publishing it then, but two months ago I had this idea of publishing it as a mini-book. Something like Penguin Minis. So, I talked to Noor (co-author of The Dreaming Reality) and we decided to again go for independent publishing. We had this confident only because of the first book. We had so many people waiting for another book from us, so we thought this would be the time. Then we edited it a couple of times again and sent it to our printer. It came out after a week, and it looked too damn pretty.

6. What sort of reviews you are getting for Maya?

Uhm, am I allowed to brag? Haha, no, they’ve been good so far. Really good. Maybe because most of the people who’ve read it like me already. But I could be hopeful and say that it’s a story that resonates with everyone. At least everyone who’s had a taste of a relationship of some sort.

Related Interview: “You cannot back out because of negative reviews, since a story can never make everybody happy”— Chirasree Bose, Author of Done With Her

7. Whom do you consider your icons when it comes to writing? Any favourite authors?

My absolute favourite author is Gabriel Garcia Marquez. And then I also read a lot of Murakami, Bukowski, Hemingway. Although lately, I’ve shifted to poetry, so I barely read any novels.

8. I see most of the young writers choosing romance as the core theme for their books. Doesn’t that make the theme ordinary for readers? Please share your views.

I don’t think romance is an ordinary genre. It’s so prevalent. It’s all around you. Only writing can be ordinary. So, when I say Maya is no extraordinary story, I only mean that there is no mind-blowing plot. But the writing is, and so is the complexity of the characters. And that’s what matters to me.

I think I’m digressing. So, romance is something almost everyone experiences. And well, I believe in the cliché of writing what you know, and romance is perhaps one of the few things I’ve known, so. You just have to know how to make your story not ordinary through the craft of writing. And that is one compliment that has stayed with us right through the beginning, that it is extraordinary.

It’s not hard to believe it because the work put in both the books had been immense. But on the other hand, I always look down on my work for some reason and hence I discard most compliments thinking they’re just flattery.

9. It is often said that writers have their hearts broken at some stage of life. Does that remain true for you as well?

Hahaha, no. I don’t know. I don’t remember my heart being broken or anything of that sort. Perhaps, I was born with a broken heart.

– Books that have influenced your life?

The Catcher in the Rye

Love in the Time of Cholera

– If your book were to be turned into a movie, who are the celebrities that you would love to star in it?

– Things you love to do when you are not writing?

– What compliment do people give you the most?

That my writing is very vulnerable and honest.

11. What’s next for Karan Kapoor? When do we expect your next book?

Uh, I have been working on a poetry collection for a while now. Let’s see how it goes.

Garima Pradhan, Author of Broken is the New Beautiful

Alisha Nandeshwar, Author of No More No Less

I just want this interview to read by few awesome writers , who recently gave up because book did not do well in first month , i loved his persistence and how he believes it can be much better…..To be self critic is blessing ….. 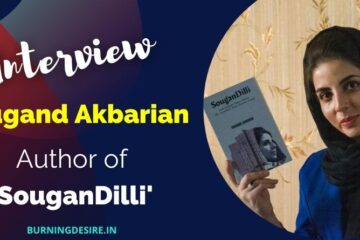 Sougand Akbarian is an Iranian bestseller translator of Indian literature in Iran into Farsi (Persian) language. Recently, she came up with her debut novel- SouganDilli, which has become a bestseller. The readers are loving the Read more… 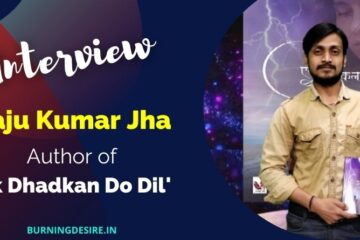 Raju Kumar Jha is the author of ‘Ek Dhadkan, Do Dil’- a novel based on real-life incidents. Having worked for leading media portals, like DD News, Dainik Jagran, India News, Aaj Tak, and more, he Read more… 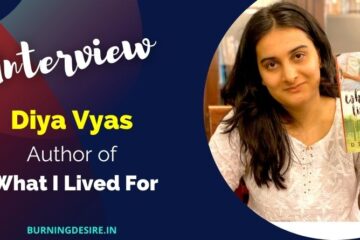 “The idea behind the book existed since the beginning of me playing badminton,” – Diya Vyas

This week, we are bringing you an interesting conversation with author Diya Vyas. Diya is a writer, an aspiring filmmaker, and a sportsperson who has played badminton at the national level. She recently came up Read more…